CANTONMENT BOARD BARRACKPORE
Ministry of Defence

(1) For every cantonment there shall be a Cantonment Board.
(2) Every board shall be deemed to be a municipality under clause (e) of article 243 P of the constitution for the purposes of –
(a) receiving grants and allocations; or
(b) implementing the Central Government schemes of social welfare, public  health, hygiene, safety, water supply, sanitation, urban renewal and education.

Incorporation of Cantonment Board:- Every Board shall, by the name of the place by reference to which the cantonment is known, be a body corporate having perpetual succession and a common seal with power to acquire and hold property both movable and immovable and to contract and shall by the said name, sue and be sued.

Constitution of Cantonment Boards.
Cantonment Board Barrackpore is a class II Cantonment Board and consists of the following members, namely:-
(a) the Officer Commanding the station as ex officio or, if the Central Government so directs in respect of any
cantonment , such other military officer may be nominated in his place by the General Officer Commanding-in-
Chief, the Command;
(b) the District Magistrate or an Executive Magistrate not below the rank of Additional District Magistrate
nominated by him;
(c) the Chief Executive Officer; as member secretary
(d) the Health Officer, ex officio;
(e) the Executive Engineer ex officio;
(f) two military officers nominated by name by the Officer Commanding the station by order in writing;
(g) seven elected members. 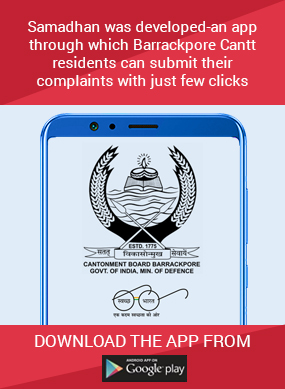